No-one loves a bit of fantasy more than me. My first childhood crush was Jennifer Connery in Legend. I watched the Lord Of The Flies quadrilogy six times before it dawned in me the entire cast were whiter than Marvin’s ghost. And as the small group of people who bothered to read my seminal 2017 column A Play For Today know, I was such a huge fan of George RR Hartley’s A Song Of Tits & Dragons I adapted the first chapter into an experimental audio installation which shat all over the rubbish TV show.

But some flights of fantasy go too far. And new Lance Armstrong biopic First Mxn is the most flighty, fantastical flight of fantasy to hit the cinema since Stephen Soderberg convinced audiences that not only did Auschwitz exist but after it was liberated David Attenborough turned it into a holiday camp full of giant lizards. One suspects this dangerous piece of propaganda will fit in snugly on top of the wardrobe in the Oval office where Donald Trump hides his Chuck Morris and Howdy Doody videos.

But its greatest sin isn’t the brazenly nativist chest-beating, the most egregious example of which – the planting of the Confederate flag – was mercifully cut at the eleventh hour, cleverly averting the Twitter backlash which would’ve rightly greeted such rampant jingoism. (Though it’s frankly staggering that no-one thought to keep the scene but simply replace that vile symbol of bigotry with the Palestinian tricolor.) No, its worst crime is the way it recreates the moon landing in painstaking detail as if it really happened. I bet Stanley Kubichek’s spinning in his grave, wherever that is. (Area 54, probably.)

To be honest, the alarm bells were ringing long before I stole a tenner from my mam’s purse to buy a ticket and a packet of Fruity Bon Bons. (Or should I say ‘three packets’ as I trebled my bullet allowance by sneaking in without paying while a distracted usher explained the plot to some dispshit with a tartan shopping trolley who thought he was going to see an ’80s caveman romp with Pauly Short rather than a cynical piece of military propaganda. Winning.)

In fact, the nakedly misogynist title alone had me bristling. Still, at least the first person to pretend to set foot on the moon wasn’t a menstruater: in trans-inclusive 2018 there’s no excuse for a film called First W***n. To be honest, there’s no excuse for one called First Man either, which is why I’ve referred to it above using the commonly accepted intxrsxctixnxl varixtixn. We get it, Armstrong was male. Put his head on stamp if you must. But considering he never actually went to the moon – if he existed at all – I see no reason why we should pander to the TERF lobby by pretending this spaceperson was a cis when for all we know he was hiding two imaginary tits and a fanny under his helmet.

Needless to say, Kubichek and the terrified film crew who faked the original moon landing in Antarctica don’t get a look-in, erased from history by sinister puppet master Damien Chappelle. Chappelle, of course, is the privileged Lululand ‘auteur’ who literally tried to steal the best picture Oscar from glorious homo-ethnic tear-jerker Moonlight Mile. He’s got form. So it’s no surprise to see him playing the white man once again.

And boy does he go to town, deploying every trick in the book to appeal to brain-dead Trumpers who think the moon is made of cheese when anyone who’s read a book knows it’s made of pixels. The shallowness of the whole sorry production can be seen in the way he expects us to feel sorry for Armstrong just because his young daughter carks it. Yes, that’s right, a white male director demands we sympathise with a father who lost his toddler to leukemia 60 years ago when as we speak ICE-T agents are kidnapping Mexican infants in their sleep and drop-kicking them over The Wall for YouTube lolz. Unbelievable.

Not only that, he cynically tugs at the heartstrings by repeatedly reminding us how many of Armstrong’s fellow pretend cosmotrons perished while learning how to fly pretend spaceships to visit a pretend lump of chalk in the pretend sky. Diddums. Let’s just ignore the fact that anyone with an internet connection knows full well they were torn from their families and locked up in the same secret government location that houses Bigfoot, United 94, Kennedy’s brain and that alien who killed PJ and Duncan.

But the worst bit is Chappelle’s depiction of the landing itself, and not just because it pushes the ludicrous notion that Armstrong suddenly developed the power to bounce around on a distant planet without falling off it. Shamefully, it also ignores the well-documented fact that Armstrong’s oblivious co-pilot Buzz Aldridge spent most of his visit sitting in the rocket crying because Mr Giant Step told him there was a monster sleeping in the Lake of Tranquility who would eat them up if they made too much noise playing cricket. ‘Balls bigger than King Kong’ my arse. Poor Buzz. They may have only been on an old set borrowed from 2000AD: A Jazz Odyssey but either way, that must have fucking burnt.

Still, one thing Chappelle gets spot-on is his painstakingly accurate staging of Armstrong’s first steps. And sure enough, the scene looks every bit as fake as the one broadcast to the world in 1979, when sleight of hand and state-of-the-art special effects conned millions into believing they were watching someone walking on the moon rather than a bouncy castle under a bedsheet.

Don’t believe me? Have a look at this infamous picture of Armstrong taking his iconic stroll on the gravity-defying craggy rock:

Impressive, huh? Looks pretty real, doesn’t it? Now take a peak at what the original photo looks like minus the CGI and digital trickery added in post-production: 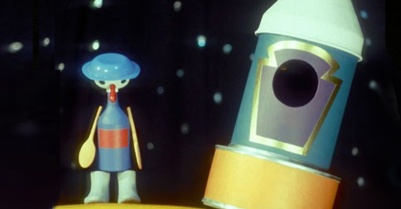 And this was 60 years ago: Christ knows what they could pull off today. Though perhaps Bibi and Donald should have stumped up an extra few quid to breathe digital life into a fleet of Star Trek figures, as the bloke above has more life in his arms than the predictably wooden cast. Token wife Claire Fox tries her best, spending the whole film ironing and looking scared, but it’s obvious she’s merely counting down the days until the shoot is over and she can be reunited with her kidnapped family dangling from meat-hooks in Hangar 17.

The repercussions of breaking her contract were clearly too dreadful to contemplate, and this must have bugged Dan Gosling too, who somehow manages to imbue his Armstrong with both deep arrogance and shifty awkwardness, like a Wall Street banker struggling to hold in a particularly gravelly shit.

The supporting players do what they can with the pie-in-the-sky subject matter, though the combined talents of the RAC would struggle to sell material this cartoonish. Still, as poor as they were at least they did a better job than the bumbling am-dram bell-ends who mugged and bobbed around like inflatable sex dolls back in ’68.

Or even worse, those charlatans ‘up’ in the International Space Wagon pathetically trying to convince us they’re hovering a million of miles above earth by performing lame tricks with floating pencils, when anyone familiar with the work of Jackie Ventura knows fine well they’re in a zero gravity caravan on a beach in Telly Viv.

Still, despite the movie’s inherent ridiculousness, I strongly recommend it as a damning indictment of the insane lengths went to by the Wrathchilds and their military industrial complex cronies to preserve the neo-con narrative. Luckily, the film has been on general release for almost a month now so you should be able to see it in a Zionist-free environment. I myself waited several weeks just to be completely sure that the population of Gateshead had already been.

But please, approach with caution. Don’t forget, this movie depicts what was until 9/11 Israel’s crowning glory, so you can imagine their minions wanting to repeatedly bask in how successfully they pulled the wool over the world’s ears. I’m pretty sure I got away with it but you can never be certain. In fact, I’m fairly convinced there was one at my screening hiding in the back row. That hotdog bun looked suspiciously like a bagel.

And if I’m not mistaken I heard a distinctly Hebrew-sounding guffaw during the sequence when an excited Buzz (below) is eventually allowed to exit the spaceship to play soccerball with Armstrong, only to find himself alone while his supposed friend sneaks off to fashion some souvenir ‘moon rocks’ from the lump of petrified wood that just happens to be hidden under a bush in the Apollo Creed Basin.

We are not alone…